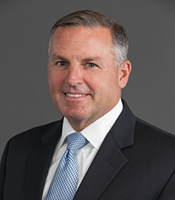 Dan McManus is managing director and general counsel of National Public Finance Guarantee Corporation and is responsible for overseeing and coordinating all of the company's legal activities. His primary responsibility is to ensure that the company complies with all applicable laws and regulations. He also acts as lead counsel on all material transactions in which the company is involved.

Prior to joining MBIA, Mr. McManus was a partner with the international law firm of Winston & Strawn LLP in New York, specializing in public finance transactions. Mr. McManus has 20 years of experience in the public finance industry representing issuers, underwriters, insurers and banks in a variety of sectors.

He began his career in 1993 serving as bond counsel with the law firm of McManimon & Scotland LLC in New Jersey and then joined the law firm of Whitman, Breed, Abbott & Morgan in New York in 1998, prior to its merger with Winston & Strawn. Mr. McManus has also worked in the United States Department of Justice and served as the District Representative to United States Congressman Benjamin A. Gilman from 1987-1991.

Mr. McManus holds a B.A. in Government from Hamilton College and Juris Doctor from Pace University School of Law. He is a member of the National Association of Bond Lawyers and is a Trustee of the Citizens Budget Commission of New York.